A lot of awesome things were revealed at Apple’s 2014 keynote. We were all pretty excited for the the rumors to be put to rest about the new iPhone 6. Some of us live streamed parts of the event, checked in multiple times with the live blog and of course hopped on twitter to make sure we were getting all of the information that we needed.

Basically what you need to know is that there’s a watch coming out at the beginning of 2015.  It’s cool, and it’s not called the iWatch, it's the Apple Watch.  There’s an iPhone 6 and an iPhone 6 Plus coming out that will be compatible with said watch (compatible with iPhone 5c and 5s models as well).  Apple Pay is now a thing and U2 released an album, at the keynote, that is now available for free on iTunes.

My favorite part about following these events, aside from usually being mindblown, is the live tweeting.  Farhad Manjoo, an American Journalist and author, currently a tech writer for the New York Times live tweeted the event and basically gave us all the information we needed to know complete with some dry humor.  You can see all of his tweets here, but these are some of the best. 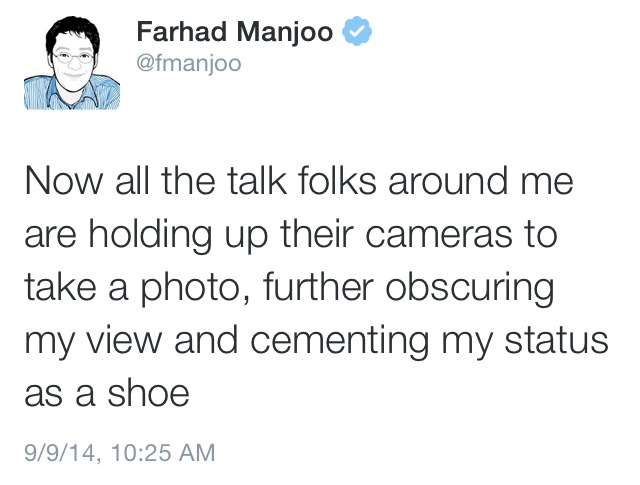 This is after he's tweeted at the fellow reporters not to bump him because he was told the best seats were in the back. 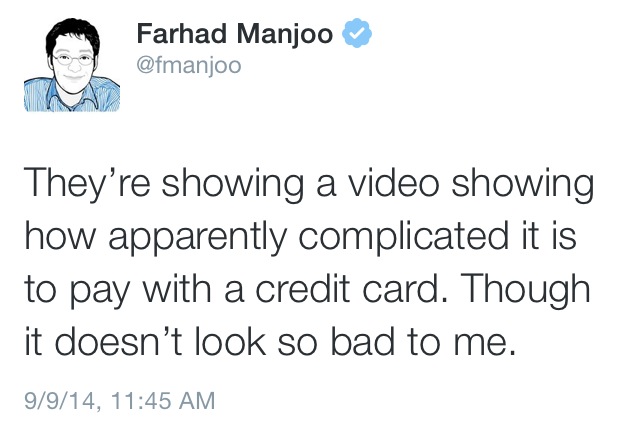 Right before they introduce Apple Pay.  Is he going to be impressed?

He later follows up with "Apple pay is amazing.  It's the most comprehensive payment system I've ever seen at launch."

He goes on to share some of the specs of the watch and then... 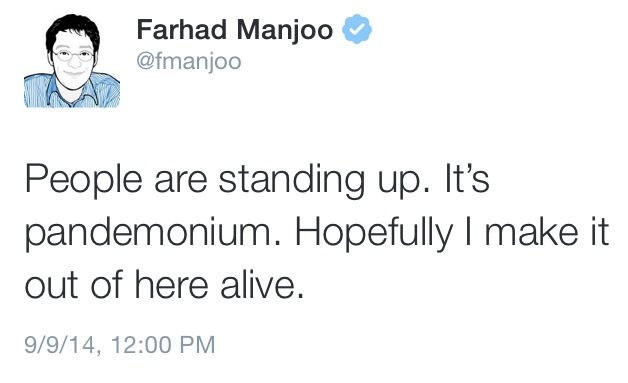 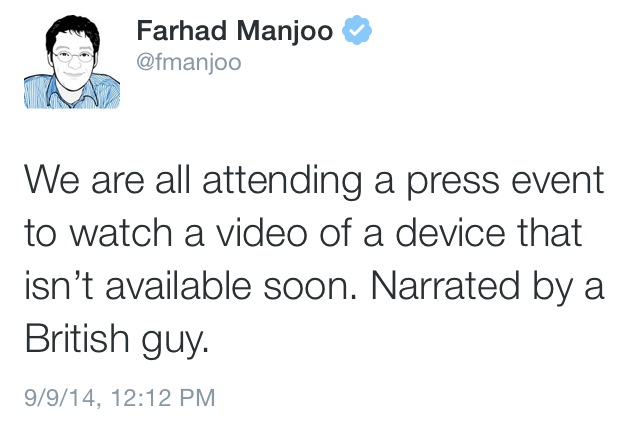 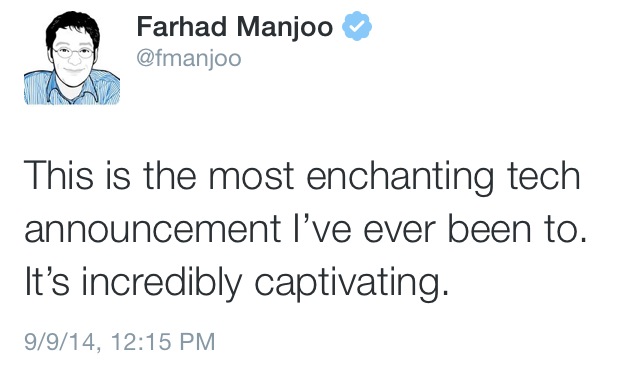 Yes, he's impressed.  But he's not impressed with what's about to come next... 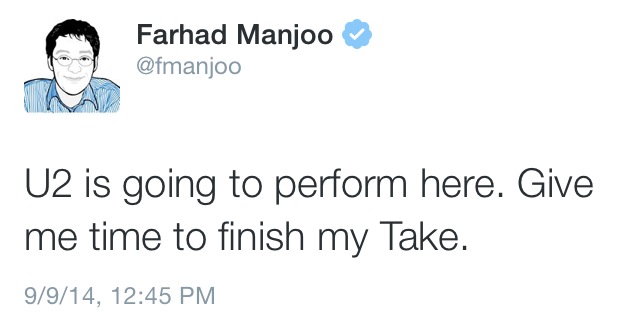 He's not excited.  Not excited at all. 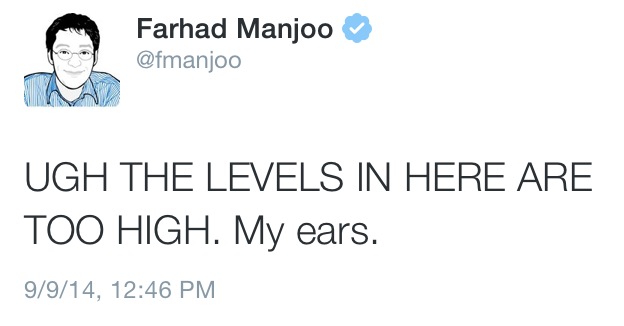 I think he's hating it. 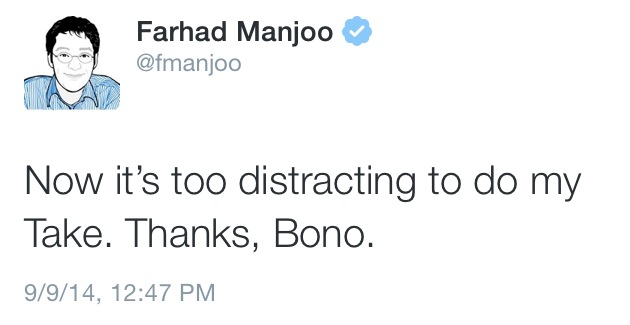 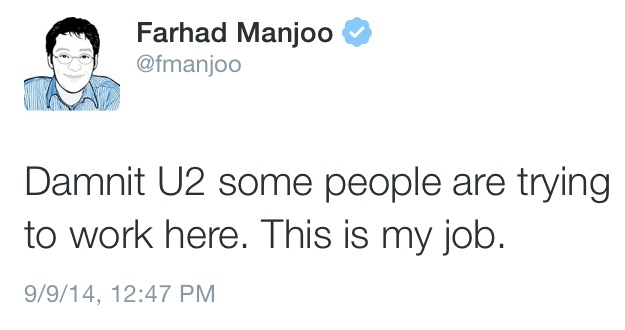 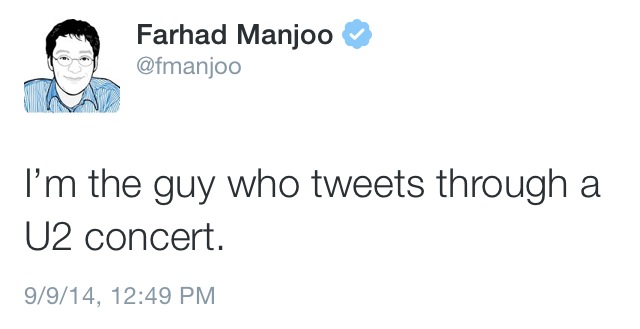 And we're loving it. 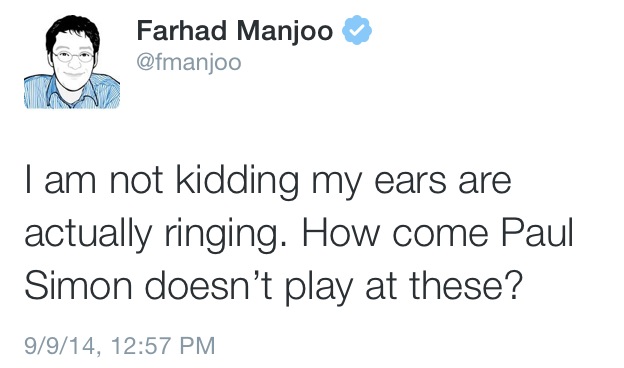 So he wasn't thrilled about the music, but we were definitely thrilled about his live tweeting.  I highly suggest you follow @fmanjoo for future Apple keynotes, and especially in the meantime.